1) What is "internal rate of return" and how is it calculated?

2) Why is it hard to compare your internal rate of return to that of the S&P500?

What is "internal rate of return" and how is it calculated?

The internal rate of return of a stream of cashflows (which is all an investment is in terms of its performance) is the annualized effective compound return rate.  A natural question is - well what's that?  The easiest way to think about it is to compare it to an interest rate on a bank deposit.  A bank term deposit of $10 000 may have an interest rate of 6% (let's assume after tax) for a term of 5 years.  As long as interest is paid yearly, the internal rate of return for the bank deposit is 6%, because the annualized effective compound return rate is what the bank tells you it is - 6%.

That's easy to work out.  But how do you compare that to: 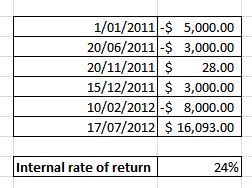 You'll see that those cashflows are events based on the bullet points above.  The internal rate of return formula in excel is simply "=xirr(values, dates)".  And you get 24% in my example.

Why is it hard to compare your internal rate of return to that of the S&P500?

The fund has data on all dividends, all purchases and sales of shares since inception.  We use that to get July 14's 7.52% internal rate of return.  But how do we compare that to an investment in the S&P500?  Do we assume that on the first day we purchased shares, the alternative was to purchase the S&P500?  But what if a month after the first purchase, we purchased some different shares?  If the S&P500 has gone up since then, our performance looks terrible if we backdate the comparator to having purchased the S&P500 at the earlier date (of first purchase).  Vice versa if the S&P500 has gone down.

The problem is knowing what to compare when you are slowly adding positions to your portfolio (as we are).  The only sound way to do it is to, at every purchase and sale, assume that you had purchased or sold the S&P500 at equal value to the actual purchase or sale.  So if the fund bought $50 000 of IBM on 20 January 2012, we assume that the alternative was to buy $50 000 of the S&P500.  If the fund sold $10 000 of MSFT, we assume that the alternative was to sell $10 000 worth of the S&P500.  This method removes any influence of "market timing" in the comparison. This seems fair, since the whole premise of the fund is that market timing (for us) is impossible, and all we can try to do is buy stocks cheaply whenever we see them.

Having set that all out, if I get hold of historical prices for the S&P500, I think I might actually be able to compare performance directly with a bit of tinkering in excel.  I might try to do that sometime this week.

So the fund moderately outperformed the index.

Mark Weldon is the former CEO of NZX, the New Zealand stock exchange (which itself, is listed on the NZX as “NZX”.

In today’s stuff, there’s an article about his big sell down of his NZX shares which he accumulated while CEO of NZX. He's bought a vineyard.

The article makes him seem to be pretty confused, but I expect he’s skirting around the truth to be polite. He says:

One way to see this is to think of your assets as two things - your human capital (your skills, connections, current employment) and your financial capital (money, shares, house, etc). When you are heavily invested with both your human and financial capital in the same basket, you are incredibly undiversified. That's what Weldon was when he was at NZX.

The easiest intuition to think about is those Enron employees who had invested their pensions in Enron shares. When Enron was found out to be the fraud that it was, those employees lost their jobs and their savings. Had they diversified away from Enron with their financial capital, they would have been much better off, and exposed to much less risk. So there’s a reason to think that the story is not different when you work at a place. In fact it’s a scarier story.

From a shareholder’s perspective, often we’d like the CEO to own a lot of stock of the company – to some extent it aligns the CEO’s interests with ours (both parties want the price to go up, and hopefully the CEO can actually do something about it). But from the CEO’s perspective it’s very risky. Sometimes the risk can pay off, and it certainly makes sense if, as the CEO, you believe you can have a meaningful impact on the business, and that impact will increase the share price more than the increase in other stocks who presumably have CEOs who are as confident as you in their own abilities.

In other words, if as a CEO you can answer the question “am I an above average CEO?” in the affirmative, then maybe it’s worth trading off some diversification for this outsized performance. Of course, almost every CEO, by their nature, will think that they are above average, so it’s probably not a bad strategy to just ignore your subjective belief, assume that you are overconfident in your belief of your above averageness, and do not invest any financial capital investment in the firm you are CEO of (and if you did the numbers, depending on the amounts of your physical and financial capital it might even make sense to go short the shares (but then you’d probably lose your job so....)).

In Weldon’s case, the share price of the NZX performed very well over his tenure, so there’s (at least) weak empirical evidence that he is an above average CEO. And you’ve got to expect that the board who appoints you as CEO know how many shares you own and like the fact that you’ve doubled down on the company – you are incentivised.

So why is Weldon selling? The real answer must surely be a combination of two reasons:
· He needs the money for his vineyard, and
· He has no ability to influence the share price by now, and suspects that the new CEO will not be as good as him (or at least the information asymmetry of him knowing his own abilities intimately but not knowing the new CEO’s abilities as intimately brings enough risk into the situation that he should sell down).

The first reason is almost certainly dominant, but the second reason is more fun to think about.
Posted by Phil at 11:05 PM No comments:

This blog sets out the absolute and relative performance of my investments.